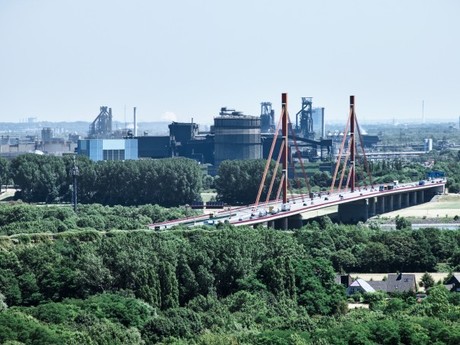 thyssenkrupp Steel announced last month that it has launched a series of tests into the use of hydrogen in a working blast furnace. The Duisburg-based steel producer said they are the first tests of their kind and are aimed at reducing significantly the CO2 emissions arising during steelmaking. The start of the test phase marks a milestone in the transformation towards climate-neutral steel production.

The tests now started are an important part of thyssenkrupp’s climate strategy to become climate-neutral by 2050. By 2030 emissions from the company’s own production and processes (scope 1 emissions) as well as emissions from the purchase of energy (scope 2) are to be reduced by 30%.

“We’ve set ourselves a clear goal with our climate strategy,” said Dr Klaus Keysberg, member of the executive board of thyssenkrupp AG responsible for the group’s materials businesses. “Steel production will play an important part in reaching our climate targets because the potential for reducing emissions is huge. That’s why we’re working flat out to drive the transition to hydrogen technology.”

In the classic blast furnace process around 300 kg of coke and 200 kg of pulverised coal are needed to produce a tonne of pig iron. The coal is injected as an additional reducing agent into the bottom of the blast furnace shaft through 28 so-called tuyeres. At the start of the tests hydrogen was injected through one of these tuyeres into blast furnace 9. It marks the start of a series of tests in which thyssenkrupp Steel plans to gradually extend the use of hydrogen to all 28 tuyeres on blast furnace 9 and then, from 2022, to all three further blast furnaces. The advantage is that whereas injecting coal produces CO2 emissions, using hydrogen generates water vapour. CO2 savings of up to 20% are therefore already possible at this point in the production process.

“Today is a groundbreaking day for the steel industry,” said Premal Desai, Chairman of thyssenkrupp Steel Europe, on the day of the test. “We are doing pioneering work here. The use of hydrogen is the key lever for climate-neutral steel production. Today’s test is another step in the transformation of our production which will culminate in green steel. At the same time, we see what is possible when business and government work together towards a common goal. We are very grateful to the state of North Rhine-Westphalia for supporting the project.”

“The project is an important step on the path to a greenhouse gas-neutral industry and a good example of how innovative key technologies can be developed in North Rhine-Westphalia. We need to keep driving the use of hydrogen in industry because it offers great opportunities, especially in steel production,” said NRW economics and digital minister Prof Dr Andreas Pinkwart.

The start of the test phase also marks the project’s transition to industrial scale. Preliminary investigations and simulations have been carried out over recent months. The tests in a working blast furnace take the project to the next level. “We want to reduce emissions with hydrogen while continuing to produce pig iron of the same quality,” explained Dr Arnd Köfler, thyssenkrupp Steel Europe’s Chief Technical Officer. “At the same time we are breaking new ground with the tests on blast furnace 9 so it is now a question of continuously analysing and evaluating the furnace’s operation. The results will help us to widen the use of hydrogen to all 28 tuyeres.”

A Curtin University research program has been awarded more than $580,000 by the federal government.

Emerson was recognised by IoT Breakthrough for its digital transformation strategies.

A new national workshop series has been established to inform and guide the development of...

Electronics could stay cool by 'sweating'

Improving operational performance by bringing people back into data centres

How safe is your business?