Super-intelligent AI would be uncontrollable: research 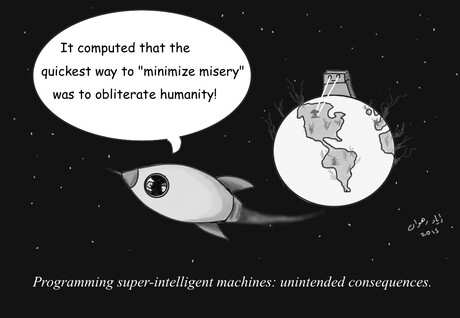 We are fascinated by machines that can control cars, compose symphonies or defeat people at chess, Go or Jeopardy! But while more progress is being made all the time in artificial intelligence (AI), some scientists and philosophers warn of the dangers of an uncontrollable super-intelligent AI. Using theoretical calculations, an international team of researchers, including scientists from the Center for Humans and Machines at the Max Planck Institute for Human Development, show that it would not be possible to control a superintelligent AI. The study was published in the Journal of Artificial Intelligence Research.

Suppose someone were to program an AI system with intelligence superior to that of humans, so it could learn independently. Connected to the internet, the AI may have access to all the data of humanity. It could replace all existing programs and take control of all machines online worldwide. Would this produce a utopia or a dystopia? Would the AI cure cancer, bring about world peace and prevent a climate disaster? Or would it destroy humanity and take over the Earth?

“A super-intelligent machine that controls the world sounds like science fiction. But there are already machines that perform certain important tasks independently without programmers fully understanding how they learned it. The question therefore arises whether this could at some point become uncontrollable and dangerous for humanity,” said study co-author Manuel Cebrian, Leader of the Digital Mobilization Group at the Center for Humans and Machines.

In their study, the team conceived a theoretical containment algorithm that ensures a super-intelligent AI cannot harm people under any circumstances, by simulating the behaviour of the AI first and halting it if considered harmful. But careful analysis shows that in our current paradigm of computing, such an algorithm cannot be built.

“If you break the problem down to basic rules from theoretical computer science, it turns out that an algorithm that would command an AI not to destroy the world could inadvertently halt its own operations. If this happened, you would not know whether the containment algorithm is still analysing the threat or whether it has stopped to contain the harmful AI. In effect, this makes the containment algorithm unusable,” said Iyad Rahwan, Director of the Center for Humans and Machines.

Based on these calculations the containment problem is incomputable, ie, no single algorithm can find a solution for determining whether an AI would produce harm to the world. Furthermore, the researchers demonstrate that we may not even know when super-intelligent machines have arrived, because deciding whether a machine exhibits intelligence superior to humans is in the same realm as the containment problem.

The study, ‘Superintelligence Cannot be Contained: Lessons from Computability Theory’, was published in the Journal of Artificial Intelligence Research.

Four Pillars powered by the sun