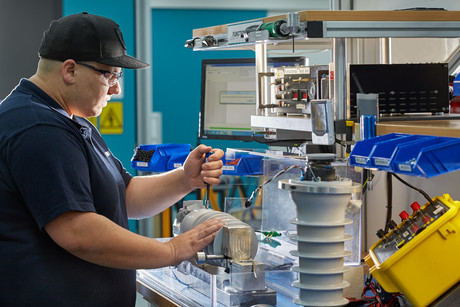 One year since moving to a state-of-the-art new facility, Siemens’ Yatala manufacturing facility has expanded its export market and secured its largest deal in the US. The order from a major Californian utility for Fusesaver is to help reduce the risk of wildfires in the state and to also help in the stabilisation of the network.

The Yatala factory is home to the Siemens Fusesaver, a homegrown product that is helping eliminate up to 80% of sustained electricity outages on rural networks in over 30 countries. As the world’s fastest medium-voltage circuit breaker, it also means that it can react in 10 ms to prevent sparks from faulty power lines or traditional pole fuses. This makes Fusesaver particularly interesting to countries and communities with high bushfire or wildfire risk.

“I’m really proud that a homegrown innovation, with the backing and support of Siemens, has created such global demand,” he continued. “Energy utilities across the world are seeking greater energy reliability and reduced costs and Fusesaver is helping deliver this.

“Australia can clearly be a competitive manufacturing nation if you create the right environment and scale globally. And with further investment into research and development, I’m really pleased to see the launch of another innovation — the Compact Modular Recloser — that provides a sustainable alternative to future energy network challenges.”

Fusesaver is the world’s fastest medium-voltage (MV) outdoor vacuum circuit breaker. It protects overhead distribution networks in rural areas. As a fuse is unable to distinguish between temporary and permanent faults, it blows on all faults, causing downstream customers to lose power and requiring a line crew onsite.

In rural networks it may take hours for the line crew to drive to site, patrol the line and reconnect supply. This leads to high operating costs for the utility. In contrast to a fuse, Fusesaver can detect, open and clear a fault in as little as 10 ms, which protects the fuse and line while enabling higher network reliability. Its unique fault-clearing speed is claimed to make it the fastest MV outdoor vacuum circuit breaker. This feature also reduces the risk of bushfires dramatically because it diminishes the probability of an arc ignition causing a fire.

Only 12 months since the official factory opening in Yatala, the team behind Fusesaver also launched a new, locally researched and developed Compact Modular Recloser (CMR) that replaces dated technology from the mid-20th century.

“There is a great demand for innovative products and solutions to assist companies around the world as they tackle the energy transition — and we have the engineering and R&D know-how to do this right here in Queensland,” said Dr Brett Watson, one of the co-founders of Fusesaver.

“While the team is pleased with the positive response and success, it doesn’t come as a surprise,” said Watson. “There aren’t many products in the market that can do what the Fusesaver and CMR are capable of. With the introduction of voltage-powered technology, we are providing a glimpse into possibilities and the innovative potential of our team. We keep pushing the boundaries to further enhance existing products and develop new ones to fill a gap and help solve problems in energy security and availability.”

In addition to the above, the Yatala factory also decreased its carbon emission by 50,701 kg/year with the installation of 120 solar panels — the equivalent of 838 tree seedlings grown for 10 years.