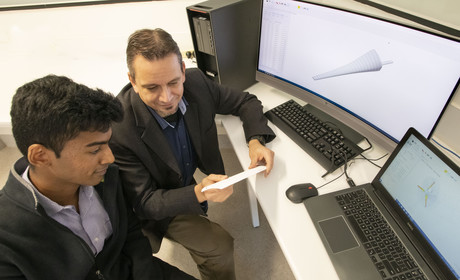 Deakin University engineering researchers have found inspiration in nature to design a new generation of wind turbine blade that increases the production of electricity.

Using the shape and function of a seagull’s wing as their muse, a team at Deakin’s School of Engineering has designed a blade that improves the generating capacity of small-scale wind turbines by 10–15%. Senior lecturer in mechanical engineering Dr Jorg Schluter said the new design could improve the options for green power generation in remote locations.

“Increasing the capacity of these small-scale turbines makes them far more useful for reliable power generation, especially in rural and remote areas,” he said. “Small-scale wind turbines can operate as single generating systems on buildings and small sites much like the traditional farmhouse windmill that pumps water.

“But, small-scale wind turbines have the added benefit of operating in collaboration with solar power systems during seasonal weather changes such as in winter when there is generally less sun but more wind.”

Schluter said there had been significant research on wind turbines used in large-scale wind farms but very little research into small-scale turbines.

“Blades designed for large wind turbines usually don’t have good aerodynamic efficiency when scaled down,” he continued. “We saw the potential to improve the generating capacity of the small-scale turbines and looked to the sky for ideas to improve the blade design.

“Nature has a way of finding impeccable solutions and I think many of us have stood at the shoreline at some point in our lives and marvelled at sea birds soaring in the breeze, mastering aerodynamics better than anything man-made.”

“The curvature of their wings has been optimised over millions of years to extract the most out of the air at these smaller scales,” Thomas said. “The integration of the airfoil shape of a seagull’s wing into the design of a turbine blade increases the generating capacity of the turbine and suggests there is greater commercial potential for these small-scale turbines.”

Thomas’s research included analysis of wind data collected in the Geelong area and showed the new style of wind turbine would deliver up to 15% more power than a conventional wind turbine.

Dr Schluter already holds a patent on a small wind turbine but says the seagull design was another exciting development in the ongoing research efforts to improve wind turbine capability and efficiency.