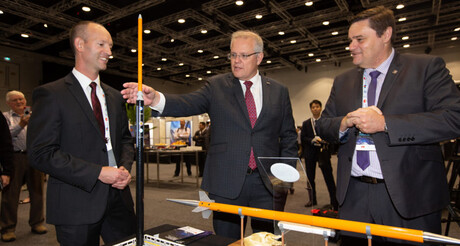 Southern Launch will host the 15 September launch at its Koonibba Test Range (KTR), 40 km northwest of Ceduna in the far west of South Australia, on land leased from the Koonibba Community Aboriginal Corporation. Launched northwards, the rocket will carry a small payload into the thermosphere, where it will be released from the rocket to fall gently back to Earth under a parachute. DEWC Systems, escorted by a local Aboriginal Cultural Monitor, will recover and examine it.

The rocket itself will apparently be unlike any rocket ever launched in Australia. Designed and built in the Netherlands by T-Minus Engineering, the DART rocket will weigh only 34 kg and have one rocket engine, yet will have two rocket stages.

The rocket will burn out of fuel six seconds after lift-off and be travelling at Mach 5, or approximately 1.5 kps.

“This event is more than just Australia’s first launch, but a testament to Australian companies coming together with our international partners to push the boundaries of the conceivable and inspire future generations to be spacefarers,” said Southern Launch CEO Lloyd Damp.

The rocket serve as the symbolic launch of NewSpace in Australia, the name given to the emerging small satellite industry, which will open up a range of new capabilities such as monitoring the seas for piracy, observing the growth of crops across the world, and connecting rural farmers to a distant water tank through the Internet of Things (IoT).

The miniature payload, built by SA electronic warfare company DEWC Systems, is a prototype electronic warfare unit capable of detecting radar signals. Future versions of the payload will go into orbiting satellites and be part of a $3.1 million contract to advance its space tactical sensor system for the Australian Defence Force.

The Miniaturised Orbital Electronic Warfare Sensor System (MOESS) project will involve a constellation of about 20 CubeSats fitted with a range of sensors and monitoring equipment to detect radio frequencies and signals such as radar to offer a view of ship and aircraft movements from above. It aims to provide the first fully Australian-developed, -owned and -operated space-based electronic warfare capability. Previously, Australia has relied on its allies to help provide these capabilities.

DEWC Systems CEO Ian Spencer said the time was right for industry to be bold and to lead.

“This mission is an important step to developing true sovereign space capability for Defence and is an excellent way to showcase the power of collaboration between innovative Australian industry partners,” he said. “The challenging question for Australia now isn’t ‘can industry deliver?’; it is ‘can government and regulators keep up?’”

The front ‘Dart’ section, emblazoned with artwork developed by the Koonibba Community, will detach from the rocket and continue into the thermosphere while the larger rocket motor will fall back to Earth.

Koonibba Community Aboriginal Corporation Chief Executive Officer Corey McLennan said the corporation has been actively engaged with Southern Launch throughout the process and was excited that the venture has come to fruition.

“Our people continue to have a strong connection with the land, the sea and the sky, so with Southern Launch developing a rocket test range on our lands, we are excited to develop a partnership role in developing Australia’s space future,” he said.

South Australia’s history of rocket launches dates back to the 1950s when US, British, European and Australian scientists launched dozens of long-range missiles and sounding rockets from ranges in Woomera, north of the new launching site.

Next month’s Koonibba launch will also be a significant milestone in South Australia’s leadership of the Australian space industry, which has gained significant momentum since it was announced that Adelaide would host the new Australian Space Agency in 2018.

South Australia is also home to major Tier 1 defence companies and several emerging space start-ups, including Fleet Space Technologies, Inovor Technologies and Myriota, which have all announced new IoT initiatives in the past year.

Southern Launch is also building a rocket launchpad on the Eyre Peninsula in South Australia. The 1190 ha Whaler’s Way site is about a 35 min drive from the regional town of Port Lincoln and will be used for launching small satellites over the Great Australian Bight into sun-synchronous or polar orbit.

Image: Prime Minister Scott Morrison joined Lloyd Damp of Southern Launch and Ian Spencer of DEWC Systems at the 9th Australian Space Forum in Adelaide for the announcement of the first payload to be launched from South Australia. Image credit: James Knowler.