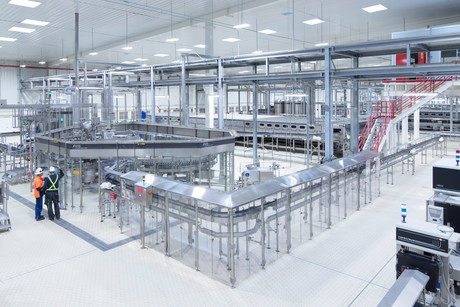 With a capacity of five million hectolitres a year, a greenfield production site has now become the largest production facility in the Heineken Group.

As far back as 2006, Cervecería Cuauhtémoc Moctezuma proposed building its seventh production site in Meoqui in the state of Chihuahua in the north of the country. Nine years later the plans were finalised by Heineken México, which in the meantime had since taken over the brewery.

The Mexican market is important for Heineken: the Mexican branch contributed 16% to the sales, 12% to the turnover and 15% to the profits of the Dutch brewery even before the new bottling plant went into operation, and over the same period Heineken México increased its volume by 4%, its value by 8% and its profit by a proud 16%. The parent company therefore decided to invest around €400 million in its Mexican enterprise.

By setting up shop in Meoqui, Heineken is closing a geographical gap in the north of Mexico. This strategic location optimises the company’s production and sales network. The region also has a good infrastructure, provides qualified personnel and a local government that specifically promotes economic development.

The brewery has created 500 new jobs onsite and 1500 indirect positions. The premises are such that expansion is possible in the medium term.

Two types of beer, six beer styles and 13 different brands are produced in Meoqui — not just Heineken but also Tecate, Dos Equis and Indio, among others. This range, filled into various containers of differing size, results in a vast diversity of SKUs and a large number of possible combinations. This calls for the shortest possible set-up times for format changeovers and maximum flexibility in labelling.

The second major challenge was sustainability: in keeping with its commitment to “brew a better world” Heineken México sees itself as a pioneer. The factory in Meoqui was thus erected according to the latest principles of the circular economy — with the focus on renewable energies and an efficient use of water. Electricity comes from renewable sources. Photovoltaic cells are installed in the brewery windows, for instance, which generate about 12% of the total electricity needed onsite. The rest is produced by wind power. Treatment of wastewater means that all facilities and green spaces can be supplied and biogas is used in the boilers. The declared objective is to become the Heineken brewery with the lowest consumption of water in the world — by 2020 the Meoqui plant plans to work with just two litres of water for one litre of beer.