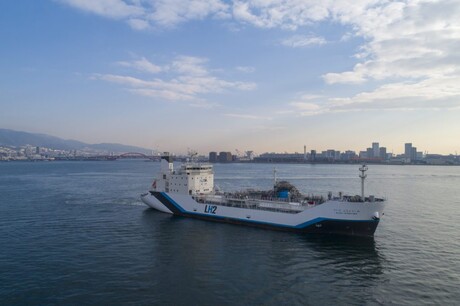 The Hydrogen Energy Supply Chain (HESC) project has announced the arrival on 21 January of what is claimed to be the world’s first liquefied hydrogen carrier, the Suiso Frontier, in Victoria, ready to make its first shipment of liquefied hydrogen to Japan. The company says the arrival marks the dawn of Australia’s hydrogen industry.

HESC says its vision is to produce carbon-neutral hydrogen through extraction from a mix of Latrobe Valley coal and biomass, capturing and storing CO2 via the CarbonNet Project and optimising energy efficiency in the HESC supply chain.

The company says the 225,000 tonnes of liquefied hydrogen (LH2) produced by HESC in a commercial phase will contribute to reducing global CO2 emissions by some 1.8 million tonnes per year (equivalent to the emission of about 350,000 petrol-driven cars), while providing infrastructure for other hydrogen projects in the region.

In a commercial phase, the project will create 30,000 full-time jobs across the Gippsland and Mornington Peninsula regions over the life of the project.

During the pilot project, 99.999% pure hydrogen has been produced from Latrobe Valley coal and biomass via gasification, trucked to Hastings, cooled to -253°C and subsequently liquefied to less than 800 times its gaseous volume to create highly valuable liquefied hydrogen.

The loading of liquefied hydrogen onto the Suiso Frontier for the return journey to Kobe, Japan, is said to make the HESC Project the most advanced and scalable hydrogen project in Australia and the first project in the world to make, liquefy and transport liquid hydrogen by sea to an international market.

The learnings from the pilot will form the basis for further work towards delivering HESC at a commercial scale. Over the next two years, the project partners will undertake extensive research and development of the technical and operational requirements for a commercial-scale project.

Activities that will be undertaken include: