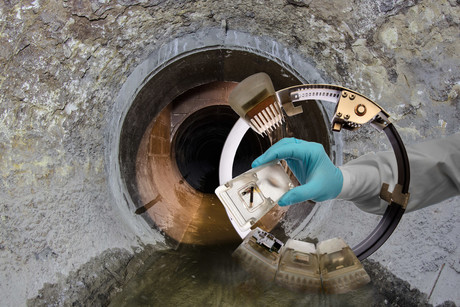 Proving criminal machinations can be difficult — for instance, when those involved covertly discharge hazardous wastewater into sewers. A new sensor system developed by Fraunhofer researchers and their partners could soon help safety agencies establish wrongdoing: placed in a sewage canal, it detects relevant substances and helps isolate and expose polluters.

There’s always one black sheep, and industry is no exception. While the majority of companies dispose of their wastewater properly, a few want to avoid the associated costs, so they quietly and surreptitiously discharge their hazardous wastewater into the sewage canals. By and large, safety agencies currently have no means of detecting this kind of environmental crime on a broad scale — doing so would far exceed their workforce capacity. But this illegal sewage poses major challenges for wastewater treatment facility operators and can even result in turnover of the affected wastewater treatment ponds.

A novel sensor system could soon make it easier for safety agencies to uncover these kinds of offences. The technology was developed by researchers at the Fraunhofer Institutes for Integrated Circuits IIS and for Reliability and Microintegration IZM, together with their partners in the EU microMole project.

“The sensor system is designed to detect certain substances that are typically found in affected wastewater,” explained Dr Matthias Völker, group manager at Fraunhofer IIS. “It comprises two sensor components — physical sensors and a chemical sensor — as well as an energy management system, a control and communication system and a sampling system.”

If tainted wastewater repeatedly causes problems at wastewater treatment plants, safety agencies could examine the sewage system at certain points and, by taking multiple measurements, gradually close in on and ultimately expose the perpetrator.

To take the measurements, a robot places three rings in the sewage pipe. The first ring is positioned directly in front of the suspect company’s inlet and the second directly behind it. Both rings are equipped with a physical sensor for measuring various parameters, such as temperature, pH and water conductivity. The two rings communicate with each other wirelessly and compare the measurement data from their sensors. Differing measurements could be due to hazardous wastewater having been discharged from the premises in question.

The third ring, which is mounted a bit further back in the sewage canal, is equipped with a chemical sensor and a sampling system. If the second ring transmits a special signal, these systems ‘wake up’. A micropump withdraws a few microlitres of the wastewater, dilutes it and channels it to the chemical sensor, which features six electrodes that are each coated with a special polymer coating. The unique feature of this system is that these polymer layers contain various gaps that are each perfectly sized to accommodate certain pollutants — much like pieces of a puzzle. When these pollutants bind to the polymer layer, their electrical capacity changes, so when the electrodes sense such a change, it suggests that the wastewater contains certain pollutants.

This cannot be used as evidence in a court of law, so the system also draws a small sample of the wastewater that can then be thoroughly tested by hand in a laboratory. To enable the chemical sensor to be used for multiple measurements, a cleaning solution flushes the attached molecules out again after each measurement.

The sensor system was created in a collaborative effort between several research institutions and other partners. The Fraunhofer IIS researchers developed the electronics, the sensor module’s signal acquisition and evaluation, and the system energy supply. Their colleagues at Fraunhofer IZM were responsible for the BUS system on the metal ring and for the design of the waterproof plug contacts for the individual components and the waterproof and chemical-proof casing. They also miniaturised the physical sensors.