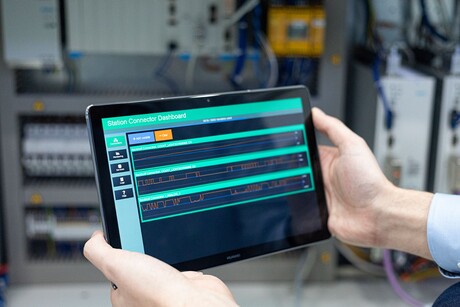 Data is the currency of the future. But how can companies access the immense quantities of data generated by their machinery and use it to modernise production? Researchers at the Fraunhofer Institute for Manufacturing Engineering and Automation IPA have developed software called StationConnector that reads out the data and makes it available to any application.

Data is increasing exponentially in production companies, not only in terms of sheer quantity, but also in its diversity. If used correctly, this data can be of great benefit for planning and optimising business processes. However, plant machinery generally consists of heterogeneous devices from different generations and manufacturers, with incompatible formats and protocols — particularly in middle-sized companies. The varying control systems and interfaces make accessing and evaluating machine data a complex and problematic process.

Linking control systems and IT

This is exactly the problem that the StationConnector software aims to address, by offering a unified interface across all plants. This allows the software to easily transfer data between industrial protocols, control systems and all kinds of IT systems in an application-specific way. StationConnector makes parameters such as power consumption, rotation speed, temperature and angular position uniformly available to any application — regardless of the readout speed they require.

“Machine learning requires a high data rate, but for monitoring, a low data rate is enough. With StationConnector, we basically establish an independent software layer between the plants and the systems or databases that will use this data later,” said Marcus Defranceski, a scientist at Fraunhofer IPA in Stuttgart.

The computer scientist developed the data interpreter along with his colleagues, Fabian Böttinger and Fabian Schulz. The major advantage here is that StationConnector offers companies the maximum amount of flexibility, allowing them to manage their machine data independently and adjust it as required. In many cases, companies have yet to decide how they are going to modernise their production and do not know what form they need their data in. “With our software, production companies don’t need to make definite decisions too early or too quickly,” said Defranceski.

Once the data is available in the right format, it’s possible to evaluate the plant’s efficiency, increase production capacity or establish data-based business models, for example. The user defines the possible fields of application.

Due to the software’s self-explanatory configuration, users do not need IT skills to operate it. Plant machinery can continue running during installation. There are no restrictions when choosing the necessary information and variables — the user decides what data they want to process. The readout process can be automated to make sure production losses are detected in good time and enable quick responses to production outages.

StationConnector interprets the different protocols, which can be expanded on a modular basis. The software runs both on individual local PCs and production servers, and in the cloud. The data readout can be represented using graphics on most mobile devices and desktop computers, so that users can get an initial visual impression of it.

The Data Coffee spin-off gets started

Having proven its effectiveness in practical applications, the software is already in use at production facilities. It also runs continuously on the test rig at Fraunhofer IPA.

Interested companies have been able to license the software since February of this year. Defranceski and his two colleagues from Fraunhofer IPA have launched an independent company, Data Coffee. At present, StationConnector is undergoing further optimisation for manufacturing companies; next year, the software will also become available for plant manufacturers to help them develop their own new digital business models.