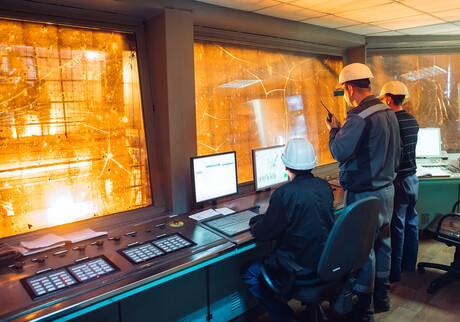 Generating power from waste heat is not just worthwhile for steelworks. New turbines driven by supercritical carbon dioxide are boosting the efficiency of power generation enormously.

A major technological advance in power generation using industrial waste heat is just around the corner, as the first turbines driven by supercritical CO2 (sCO2) are ready for operation. This heralds a new generation of turbines that offer higher efficiency than steam turbines, while needing significantly less build space.

The Oil & Gas Division at Siemens Energy in the US is already working to equip a gas compressor station with these turbines for the Canadian energy company TC Energy, which will enable it to convert its waste heat into power more efficiently in the future. The sCO2 turbine is expected to go on the grid in 2021, and it will supply electricity for more than 10,000 households.

Simon Kobler and Stefan Glos at Siemens Energy Technology Development in Germany are preparing more potential applications. They’re working on making sCO2 turbines available in the near future that will be capable of converting even larger volumes of waste heat — like heat generated in steelworks and glass foundries — into power. They’re currently doing the preparatory work as part of the Carbosola research project sponsored by the German Ministry of Economic Affairs and Energy.

“We’re working with Dresden University of Technology, the Helmholtz Center in Dresden and the German Aerospace Center in Cologne to create a demonstrator that will show that the technology for sizeable volumes of waste heat is commercially mature,” said Kobler. “Clarifying how to design and build the turbines is less important for us. We’re well-positioned to address issues like this based on our many years of experience in turbine manufacture. Our priority is to provide even stronger support at a theoretical and experimental level for the performance this technology promises before we launch any products on the market.”

The new sCO2 turbines offer extraordinary promise. That’s due to the unusual properties of CO2 when it’s compressed by pressure in excess of 73.8 bar at temperatures higher than 31°C. Under these conditions its consistency is as thick as a liquid, but it flows as easily as a gas. And that’s ideal for power conversion in the turbine. An increase in the physical density of the working medium without impeding its flow properties will increase its power density and therefore the electricity yield. But the high power density can be used for more than just increasing electricity yield in applications that currently use steam turbines. It also makes it possible to construct turbines that need significantly less build space than steam turbines offering the same output.

“Depending on the temperature of the heat source, sCO2 turbines can be smaller than steam turbines by up to a factor of 10,” said Glos. “sCO2 turbines are therefore interesting for the conversion of industrial waste heat into electricity in two ways. Firstly, the high power density of sCO2 at low temperatures is a particular advantage. At the same time, most industrial plants don’t have the space to install a steam turbine.” 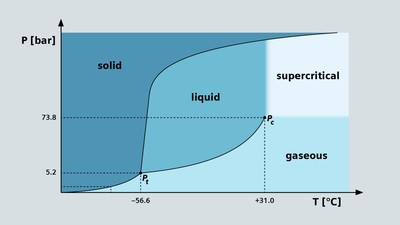 If carbon dioxide is compressed by pressures (P) in excess of 73.8 bar at temperatures (T) higher than 31°C, the result is a supercritical state with a consistency between that of a liquid and a gas.

To ensure that Siemens Energy also has some real application experience when the Carbosola project reaches its conclusion, Kobler and Glos are working to create a prototype pilot plant in collaboration with one of their customers in parallel with the research project.

“Many industrial firms that generate large volumes of waste heat have a strong interest in being able to make use of power generation using sCO2 turbines as soon as possible,” Kobler explained. “It won’t be hard to convince steelworks and glass foundries of the benefits of this new technology.”