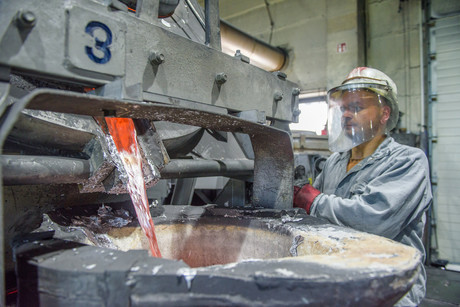 The metalworking industry — and foundries in particular — consume extreme amounts of energy and thus produce large amounts of CO2 as well. In the future, light metal foundries will be able to cut their energy costs related to production by as much as 60% and CO2 emissions by as much as 80%. A new technology developed at the Fraunhofer Institute together with other partners will make this possible.

“We have developed a completely new design for a distributed, automatable melt supply system based on innovative, modularly upgradable burner technology,” said Dr Stefan Scharf from the Fraunhofer IFF in Magdeburg. “We consider this a revolutionary design that will lead the industry into a more sustainable, digitally connected era.”

Foundries in general, and nonferrous foundries in particular, currently have to repeatedly transfer and constantly heat melt charges in a gradual process. In addition to open-flame gas burners, electricity is also predominantly used to melt and heat the metal, despite its obvious economic and environmental drawbacks. Such conventional methods of process control and the related transfer processes detract from casting quality and necessitate complex actions to handle the melt. Established processes typically have correspondingly high energy and resource requirements.

With their new approach, the researchers are banking on an unconventional but highly efficient method instead. A newly developed burner system that uses the energy carrier gas for heating delivers control system performance and homogeneity previously only seen in electrically heated units. The waste heat produced can be recovered reliably, apparently for the first time ever. The new design based on this development envisions melting, transferring and holding the metal in fully movable transfer crucibles. This will make it possible to cut the multistage process steps currently necessary down to just one process step. The movable crucibles are supplied with the requisite thermal energy at so-called ‘heat docks’ operated with the new burner system. This eliminates the drawbacks of current alternative systems.

An equally new sensor system that monitors the process continuously establishes the basis for connected process control in the foundry industry, which will be automated in the future. This ultimately lightens workers’ workloads, especially during particularly hazardous works steps, and enables companies to transform manufacturing digitally.

“This will enable light metal foundries for which the new system was developed to cut energy costs by 60% and related CO2 emissions by as much as 80%,” said Dr Scharf.  “At the same time, this will increase manufacturing flexibility and product quality significantly.

According to the Bundesverband der Deutschen Giesserei-Industrie, nearly 340 companies in the light metal foundry sector in Germany (nonferrous metal foundries) produce around 1.7 million tons of nonferrous metal casts. Around one million tons of CO2 are produced in the process. Energy costs presently add up to roughly 25% of their gross value added. Altogether, the foundry industry with around 80,000 employees generates around €13 billion a year. 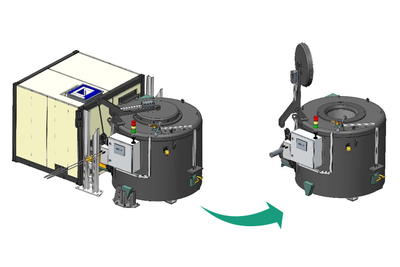 The technology was developed in a research consortium consisting of the Fraunhofer IFF, Otto von Guericke University Magdeburg, promeos and Leichtmetallgiesserei Bad Langensalza. The project, named ETAL, is being funded by the German Federal Ministry for Economic Affairs and Energy.

The researchers presented the mass manufacturable prototypes of the new transfer crucibles together with the heat dock for the first time at the Hannover Messe this year. The manufacturable product should be on the market in early 2020.