In 1893, three Irishmen — Patrick Hannan, Tom Flanagan and Daniel Shea — stumbled across 100 ounces of alluvial gold when they stopped to replace a horseshoe in the course of their travels. Hannan registered a claim on 17 June 1893, in Coolgardie, and so started the Yilgarn-Goldfields gold rush. The town of Kalgoorlie was founded in the same year.

Many early prospectors who came to the region were unprepared for the harsh living conditions they would face. Living only in makeshift shacks, thousands died from a lack of food, water, medical supplies and sanitation. But these conditions didn’t deter the influx of thousands more prospectors from all over the world, who often arrived with only a shovel and pan to seek out their fortune. It was the passion and spirit of these early pioneers that drove the success of the region, which has grown into Australia’s largest producer of gold. On the back of this success, the establishment of infrastructure allowed the community to grow and prosper.

Dwindling alluvial gold deposits gave rise to underground mines, but by the 1980s, they faced falling financial viability. This led to the development of the Fimiston Open Pit, when many existing leases and mines on the Golden Mile were consolidated. In 1989 a single management entity was formed — Kalgoorlie Consolidated Gold Mines (KCGM).

Today the Kalgoorlie Consolidated Gold Mines (KCGM) Fimiston Open Pit is a massive operation, popularly known as the Super Pit. At 3.5 km long, 1.5 km wide and over 600 m deep, it is so large that it can be seen from space and, despite its remote location, is a popular tourist attraction. The City of Kalgoorlie-Boulder has developed into a dynamic and sophisticated regional centre. It is Australia’s largest outback city with a population of over 30,000 people. Kalgoorlie’s gold production and the wellbeing of its community have always been intertwined in a symbiotic relationship.

The business of producing gold — improving the process

Annually, KCGM processes over 12 million tonnes of rock to produce up to 800,000 ounces of gold. The Fimiston Open Pit is mined using the drill-and-blast method, with the ore transported by 6 m-high haul trucks. It is crushed down to nominal 300 mm-sized rocks and then ground down to 0.2 mm-sized particles before it is mixed with flotation reagents. This produces a gold-rich froth, which is dewatered in filters to produce a sulfide gold concentrate. A common practice is to roast this concentrate at 650°C, which vaporises sulfur dioxide and other impurities like mercury.

Most of the gold ore found along the Golden Mile is intricately bound in various sulfide minerals, such as pyrite. The roasting process is the most efficient and cost-effective way to maximise the recovery of gold from the ore and has been used in the goldfields since 1898. The downside of roasting is the presence of sulfur dioxide (SO2) and mercury in the off-gas emissions. Up until early 2015, KCGM used roasting at its Gidji processing plant.

As part of its Air Quality Management Plan, the company would stop the roasting process whenever prevailing winds could blow roasting emissions towards the town and residential areas. This resulted in unplanned stoppages and the sacrifice of up to one third of available production time. Improving air quality for the community and avoiding disruptions to production were the key drivers for research into alternatives to the roasting process. This year, as part of KCGM’s $98 million Emissions Reduction Project, a new, larger ultrafine grinding (UFG) mill was installed at Gidji to replace roasting.

UFG reduces ore down to 12 µm particles; it is then subjected to a cyanidation process, followed by adsorption onto activated carbon in a process called carbon-in-leach (CIL). Next, the carbon is recovered from the CIL process and transferred to the elution circuit. The elution process uses caustic soda and cyanide in a pressurised column at 110°C to strip the gold off the carbon. Once this step is complete, only the spent carbon is left behind. The carbon is then rinsed in water and sent for regeneration via the carbon regeneration kilns.

The gold continues on to another process called electrowinning, where it is converted into a solid which is deposited onto large plates using an electric current (approximately 3000 A at 12 V). The gold is then washed off the plates, dried, melted at over 1000°C and poured into gold bars.

The implementation of UFG had a significant impact on KCGM’s downstream processes. Mark Roberts, metallurgist at KCGM, explains, “The UFG process does not remove the sulfur or mercury as the roaster did. As a result the mercury carries over into the CIL process, where it adsorbs onto the activated carbon, reducing its capacity for gold adsorption. This means carbon is required to be eluted more frequently to achieve the same result in the CIL process.”

Roberts continues, “The mercury, which had previously been removed by roasting, is now present in the kiln. The existing gas scrubbers downstream of the kiln could not effectively handle the increased load and so a new scrubber and off-gas cleaning plant had to be designed and installed.”

Tapping into the knowledge of a long=standing partnership

KCGM installed two Metso carbon regeneration kilns in 1994 and 1997. Since then, they have relied on the company’s maintenance services and engineering knowledge to ensure that the kilns continued to perform efficiently.

Supply of the new kiln was a team effort between Metso and a number of its long-term business partners: Electrical Board Manufacturers for control and automation; Mining Combustion Services for kiln heating; and NEPEAN Engineering & Innovation for kiln fabrication.

Once the design was completed by Metso’s Pyro division, the kiln was fabricated and fully assembled at NEPEAN’s production facilities in Narellan, south-west of Sydney. Electrical Board Manufacturers, assisted by Metso engineers, then installed and tested the control system before the kiln was disassembled and transported to the mine site, where it was reassembled in its final position. 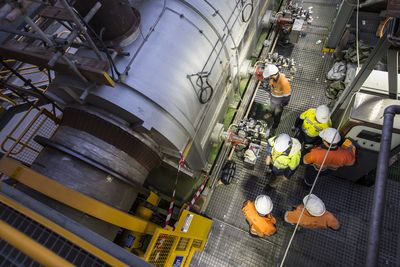 The carbon regeneration kiln is a rotating horizontal cylinder which agitates and gradually transports the red-hot carbon down the length of the horizontal drum. Three large burners indirectly heat the carbon up to 700°C. To prevent the carbon from burning at this high temperature, a steam environment and low negative pressure are maintained to keep oxygen out of the kiln.

With a focus on energy efficiency, the kiln is designed to channel the furnace’s hot exhaust gases through the centre of the kiln, which provides additional internal heating. As the gases exit the kiln, they are used to dry and preheat the incoming carbon.

With the carbon at 700°C, great care has to be taken to ensure safe interactions between the kiln and the upstream and downstream processes — particularly in the event of any process malfunction. This means the kiln needs a safety shutdown system which operates independently of any external systems or power. A momentary loss of control by the DCS or a power outage could have catastrophic results. The drum which carries the carbon runs at temperatures of between 850°C and 1000°C. Stopping the kiln drum from rotating, even for a short period of time, will cause the drum to sag under its own weight.

Hratch Loussikian, Metso’s national product manager — Pyro Systems, explains, “Even the smallest changes in tolerances will have dramatic effects on the kiln’s ability to operate correctly; it may not operate at all. With no easy way to rectify damage, it is likely the kiln would be offline for up to six months whilst a new one is constructed and installed. Our design takes care of this problem with a special shutdown operation that is driven by a battery backup system in case of power failure. It keeps the kiln rotating until all the carbon is safely out of the kiln and the drum has cooled down sufficiently to safely stop.”

Once the kiln had been assembled and tied in with the mechanical and electrical components of the upstream and downstream processes, testing and cold commissioning started. Although the kiln would be controlled by the site’s Yokogawa DCS, the kiln’s operation and control needed to be tested and proven independent of the DCS. Metso and Electrical Board Manufacturers designed a complete system that was only required to control the kiln’s operation during testing and commissioning. David Merrick, Electrical Board Manufacturers’ automation and control engineer, explains in more detail: “Once testing was complete, control of the kiln was transferred to the Yokogawa DCS. To ensure that control is exactly the same, our programming and our control interface hardware were integrated into the DCS. This was a complex process, but the cooperation I enjoyed from KCGM and Yokogawa made the process really simple. ”

Replacing roasting with UFG impacted every process downstream, including the interaction between the newly designed kiln and scrubber. Unique engineering solutions had to be developed and applied throughout the commissioning process to ensure optimal performance of these two critical elements in the process.

According to Paul Antcliff, KCGM’s project engineer, a lot of cooperation was required between the various parties. “Everybody was committed to the success of the scrubber and, when problems arose, everybody would be part of finding a solution,” he said.

“Many customised designs were developed, and Metso played a very active role by sharing their insights and ideas to identify improvements and find solutions. This included a strong participation in our HAZOPS (hazards and operability study).”

In the final step, Mining Combustion Services commissioned the gas burners. Precise settings are critical for the effective and economical operation of the kiln, and all possible conditions need to be considered and tested. One example is air flow, which is an important factor in efficient gas burner operation. The design of KCGM’s scrubber affected airflow from the kiln, and so input from many parties was required to achieve optimum results.

Michael Allen, Mining Combustion Services, elaborates, “The scrubber has the capability of taking gases from one, two or three kilns. I don’t think that this has ever been done before.

“KCGM’s effort and investment into the scrubber design is truly admirable. They spared no expense in getting it to work 100%. Every single chemical element from the process is eliminated. Even any volatiles not caught in the scrubber are incinerated. It is a fantastic tribute to the importance that KCGM place on the wellbeing of the community.”

With the roasters no longer in operation, atmospheric emissions have been eliminated from the Gidji processing plant. Everybody wins — the environment and community are safe; and the process can run 24/7, without the need to halt operations due to prevailing wind conditions.

According to Max Wijasuriya, Metso’s vice president capital equipment, the collaboration and knowledge sharing between the Metso and KCGM teams was a key success factor in delivering such a positive outcome.

“Working closely with our customers is what we do — we leverage our knowledge, people and solutions to help make the big difference,” he said.

To mark the opening of the new UFG Mill at Gidji, KCGM held a celebratory event attended by members of the local community and industry. This is a win-win for the community and KCGM, demonstrating how closely their success is intertwined.