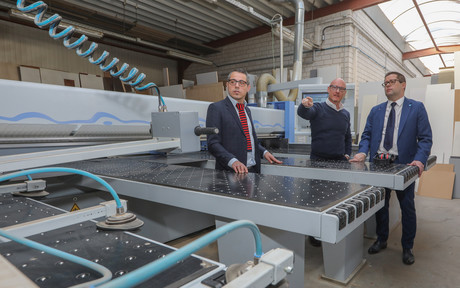 The growing use of renewable energy sources is resulting in substantial fluctuations in energy production. Fraunhofer researchers have now made it possible to design industrial processes in small and medium-sized businesses to be demand-responsive. This enables companies to maximise their use of green power from their own power plants, to respond to fluctuations and in the future to contribute to stabilising the energy supply.

The proportion of coal in the energy mix is diminishing, while renewables are steadily growing in importance. This is confronting grid operators with challenges: if the sun is shining in a clear blue sky and a fresh breeze is blowing, solar modules and wind turbines generate more power than is needed. If, however, the sky is overcast and the wind is still, power becomes a scarce commodity. How can such production fluctuations be stabilised to ensure a stable energy supply, despite the growing number of volatile power sources?

Researchers at the Fraunhofer Institute for Factory Operation and Automation IFF in Magdeburg see a solution among small and medium-sized businesses, which generate power themselves from sun, wind or even their own manufacturing waste. They will become more active stakeholders in the future smart grid, helping to make it more reliable and more stable. Achieving this goal entails designing internal energy-relevant industrial processes to be demand-responsive, managing controllable loads dynamically, generating renewable energy and using energy storage systems.

“We are developing new solutions and applications together with Mageburg-Stendal University of Applied Sciences and other partners in the European project RELflex,” said Dr Pio Lombardi, RELflex project manager at the Fraunhofer IFF. “They are primarily intended to help make manufacturing processes in SMBs more demand-responsive.

“This means businesses can adapt their manufacturing processes to the actual energy situation, fall back on energy from their storage systems during bottlenecks and possibly even use other energy sources such as incinerated wood waste.”

The heart of the development is the XDEMS dynamic energy management system.

The researchers are currently exploring how this energy management system can be utilised in the everyday business routine at one of their project partners, aRTE Möbel GmbH. One benefit is that it enables companies to utilise the energy they generate with photovoltaics and other technology for their own manufacturing processes, thus becoming more self-sufficient and less dependent on grid operators. This has an impact on business models as well: the bar can be raised higher for green products, which can be made not only out of organically produced materials but also with green energy.

SMBs can respond to the fluctuating energy supply in different ways.

“Adapting manufacturing and installing backup storage systems would be the most efficient way,” Lombardi said. “Whenever a lot of energy is available, items are made to stock and warehoused. A second option would be to let employees work flexibly, for instance, at later hours or even on weekends, based on the energy situation.”

The researchers intend to gauge the acceptance of this idea in a corresponding survey. Energy storage systems are a potential third option. They remain expensive, though, because of the high capital expenditures, and energy storage still entails losses, depending on the technology.

The Fraunhofer researchers are starting out by focusing on the monitoring system at aRTE Möbel GmbH. They are using suitable instrumentation to measure the energy generated by the private photovoltaic system and the power consumed by individual manufacturing lines or groups of manufacturing lines in real time. In a second step, the researchers will be using their XDEMS software to compile load and production forecasts from the recorded data. How much power will the photovoltaic system generate in the coming week? How many tables and cabinets have to be manufactured in that time? And how can manufacturing be controlled best to coordinate these two factors optimally, ie, to inject a minimum of power into the grid and not have to withdraw power from it? The software makes relevant suggestions here: for example, a traffic light system might be conceivable. A green light could show employees that enough power is being produced and that items can be made to stock, for instance. If energy is in short supply, however, a red light could indicate that the line ought to be used later. “We still have to consult with aRTE Möbel GmbH management about the exact form information feedback to employees will take,” Lombardi added. Once they have finished developing the monitoring system, the researchers will start working on the forecasting and control system next year.

Image: Researchers are exploring how a dynamic energy management system can be incorporated in the everyday business routine in a manufacturing SMB. © Fraunhofer IFF/Viktoria Kühne